Join SHREDLY and World Ride for a once-in-a-lifetime mountain bike safari in Botswana.

This 7-day mountain bike safari trip to Botswana is a once-in-a-lifetime opportunity to go on safari with your mountain bike. We will ride through the Mashatu Game Reserve, traverse the savannah, and experience stunning river valleys. We will stay in three unique and beautiful camps that embrace luxury and include hot showers, mouth-watering food, and breathtaking game sightings. We will likely see elephants, zebra, giraffes, and more! Don’t worry, we will have highly trained guides with us to keep us safe from any wildlife. We will also keep our distance from any wildlife so as not to disturb them in their natural habitat.

What is World Ride? 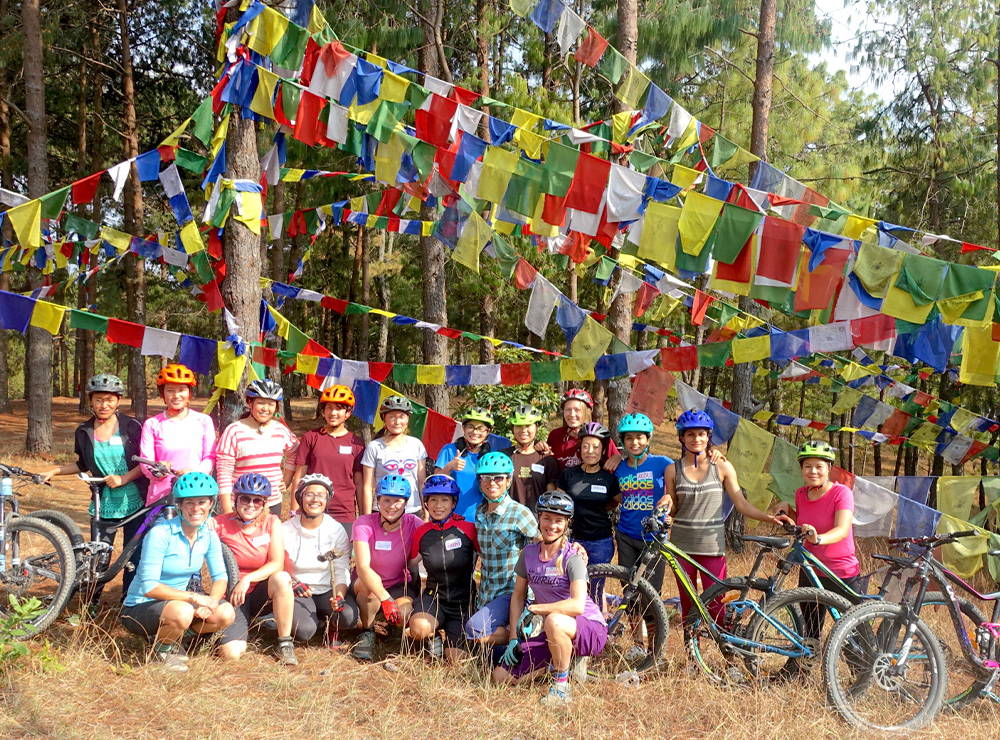 We are very excited to partner with World Ride to offer this opportunity to visit Botswana! As part of World Ride's mission to support the empowerment of women globally through supporting women's mountain biking in Nepal, Guatemala, Peru and Lesotho, a portion of this trip will help fund their Botswana Mountain Bike Program.

World Ride Director and founder Julie Cornelius and SHREDLY founder and owner Ashley Rankin will both be joining on this trip. Thank you for joining us on this once-in-a-lifetime experience that will help to provide the opportunity for women in Botswana to experience the sport of mountain biking! 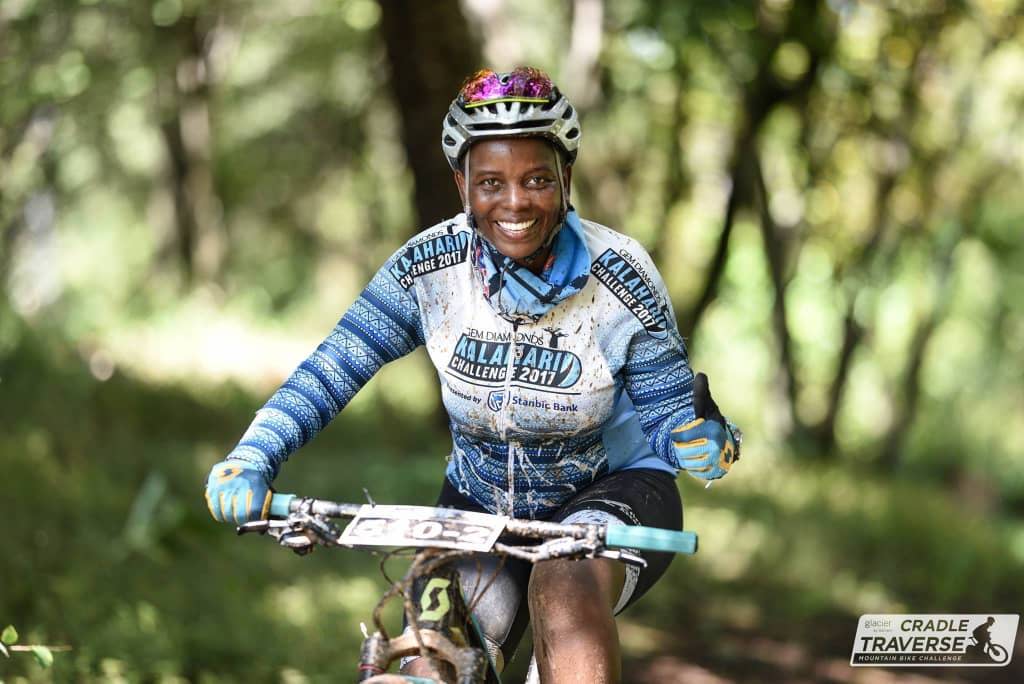 Gobona Mantel is a representative with World Ride and will be joining us on this safari.

How did you get started mountain biking?
The first time I went on a bicycle, I was a young girl about thirteen or so. I grew up with boys and I used to see boys given an opportunity to ride my uncle's commuter bike that the locals called it humber. I was never given that opportunity because I was a girl, and growing up in the village girls had certain chores that they were supposedly supposed to do, but me being me, I enjoyed doing boys' stuff. One day my uncle wanted to send me to his friend's and I asked him if he can push me on his humber so I could go fast and to my amazement he did and just one push that was all I wanted and that was the beginning of me loving and enjoying his humber.

Why do you love mountain biking?
I love mountain biking because that was the first sport I fell in love with without being pushed into doing. It unique and it's soul soothing. No matter the circumstances you find yourself in once, on a bike all your stress is gone.

What is your favorite trail in Botswana?
My favorite trail at the moment is in Mokolodi. My country is mostly flat, we don't have mountains and going inside Mokolodi gives you the experience to ride anywhere and to experience the hills, loose rocks, and sand patches there and there.

Anything else?
Teach the young ones to love themselves and never compromise on their happiness. Dream big and be whatever they are destined to be. Life is too short for compromises.

While a final and more detailed trip schedule is distributed to registered participants, below provides a general view of what you can expect.

Day 1
Meet your guide at the border and travel to the start of the ride in time for a light lunch, an introduction to your guides, and a safety talk. That afternoon will be your first opportunity to take in the beauty of the Mashatu Game Reserve and view wildlife from your bicycle. Mashatu is home to the largest herd of wild free-roaming elephants on private land in Africa, and you are almost assured of great viewing of these incredible creatures.

Accommodations: Tree Camp - This is a very unique camp; any childhood dream of sleeping up in the arms of a tree, will be completely fulfilled here. Nestled in the bough of a giant Mashatu tree and two ancient Leadwood trees, this Seligna deck, 4 meters off the ground, will be your retreat for the night. Overlooking the Majale River, it is possible to watch the wildlife from above, coming down to drink at the river. Dinner is served on the deck under the branches, overlooking the Majale River.

Day 2
We set off early through the center of Mashatu to the ancient rock formations in the west of the reserve synonymous with the Limpopo Valley. Giant baobab trees continue to scatter the landscape as they have for centuries. In the afternoon, we search for the area’s resident lion on a game drive and draw the day’s adventures to a close with sundowners (happy hour during sunset) at the ancient “Amphitheater” rocks. Back at the Kgotla, dinner is enjoyed around a large log fire. The night is spent with a ceiling of stars and Africa’s night-time melody to sing you to sleep; a voraciously rare experience which is just about as far away from city life and the modern world as anyone can imagine.

Accommodations: The Kgotla - An old Leadwood enclosure (used in the past as a traditional law court of a Botswana village) known as ‘The Kgotla’. This open-air enclosure forms the perfect, secure camp for the night.

Day 3
The sandstone formations, including the famed Solomon’s Wall, one of the numerous dolerite dykes in the area, are on the agenda to explore today. Some of the oldest civilizations in southern Africa settled in this valley. Archaeological evidence in the area includes middle and late stone age tools, rock art, and the legendary Mapungubwe Dynasty. Mapungubwe means “Place of the Jackal” in the Venda language and this dynasty existed around 1220 AD. The Mapungubwe topography itself is ancient and timeless, and combined with marvelous wildlife sightings, it makes for an incredible riding experience. This afternoon, enjoy the option of another game drive, ending at one of the most visually stunning and ethereal sundowner spots on the reserve, the Mmamagwa Hill. After a short climb, enjoy sundown beneath a beautiful baobab tree with a breathtaking view of the area before returning to The Kgotla for another night under the stars

Day 4
Wind up Elephant Valley along ancient trails stamped into the soil by centuries of migrating elephants, before heading north towards upper reaches of the Majale River. This area is peppered with enormous baobab trees and is one of the more remote areas of the reserve. After an exhilarating ride through this timeless countryside, enjoy a relaxing lunch at Tree Camp. The afternoon brings the option of an afternoon ride or bush walk or, if available and optional (extra charge $65pp), a game drive with Mashatu exploring the center of this magnificent reserve.

Day 5
The day is spent exploring the game rice center of the reserve. The koppies (small hills) make for some excellent uphill challenges and downhill runs. Stopping on the top of each koppie gives you never ending views into both Zimbabwe and South Africa; the views will literally take your breath away. They also give you a great view of the herds of animals and other game viewing. You return to Tree Camp, where you can again choose the afternoon’s activity before your last night in this magical camp.

Today’s riding promises a wonderful downhill ride and some great game viewing as we explore the Pitsane River Valley. Drinking holes, dug by elephants along the course of the Pitsane, attract thirsty herds of game. An area, where history has it, there was a skirmish during the Boer War which destroyed Bryce’s Store, an old British supply post.

There was a stagecoach line called Zeederberg’s that ran from the towns of the Transvaal in South Africa to the newly forged settlements of Southern Rhodesia, now Zimbabwe. Those coaches crossed the broad Limpopo and followed the Pitsane River into Zimbabwe. The ride returns to the Two Mashatu Camp in time for lunch and a cooling swim in the pool. A guided bush walk to one of the nearby koppies for sundowners is the afternoon excursion.

Day 7
Take in the sunrise and dawn chorus with tea or coffee delivered to your tent. Following a light breakfast, it’s time to explore the dense woodland that hugs the Limpopo River. Today’s cycling promises abundant game and spectacular views into the Limpopo River Valley as you return to camp in time for lunch and a cooling swim in the pool. In the afternoon, enjoy another ride where you are likely to encounter plentiful game: plains game, many giraffes, and herd of elephants. Having meandered across the hills with vast views back towards South Africa, the ride arrives back at Two Mashatu in time for sundowner drinks. As evening falls, take a seat in the thatched boma and enjoy a last three-course dinner while reminiscing with your fellow adventurers.

*Itinerary is subject to change.

Anything you need for your own bike (if bringing)

Get All the Details + Reserve Your Spot

For pricing and to complete your registration, please visit the link below. You will be taken to World Ride's website where complete registration details may be found.